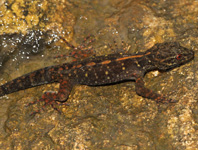 Dixa repanda Peters, previously known only from the type series of three males, was rediscovered after targeted collections in the southcentral and midwestern United States. These collections also revealed the presence of its undescribed putative sister species, Dixa falcata sp. nov. The two species are sympatric in the Ozark Mountains. Adults of D. repanda are redescribed and those of Dixa falcata are described. Males of both species are distinguished from related, similarly colored species by a falcate gonostylus and extremely reduced cercus. Males of the two species are easily separated from each other by the shape and thickness of the gonostylus. Females are not reliably separable from each other or related species. Biological insights, including known distributions, of both species are provided.