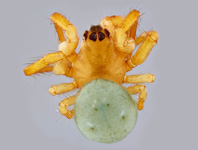 Konothrips polychaeta sp.n. from Delaware, North America, with a key to the three species of this genus

The genus Konothrips was erected by Bhatti (1990) for a single species, tuttlei, that was described from Arizona in the genus Chirothrips by zur Strassen (1967). The new genus was distinguished by the longitudinally orientated sculpture on the abdominal terga and sterna, the fore wing costa with only a single seta, and the ovipositor lacking teeth (Bhatti 1990). Subsequently, Nakahara and Foottit (2012) described in Konothrips a second species, colei, from Texas. However, those authors indicated that there is variation in these characters, with  colei intermediate in structure between tuttlei and members of Arorathrips. In the new species described below, the abdominal tergal and sternal sculpture is weakly developed, transverse medially with some reticles in the pleurotergites slightly orientated longitudinally, the ovipositor is reduced and smooth, and costal setae are present on the fore wing. This new species is described in Konothrips because antennal segment I is enlarged (more than 3 times wider than base of segment II), antennal segment II is strongly produced laterally, and the mesosternal furcal invaginations are widely separated. These characters are also shared with the species of Arorathrips, and distinguish this pair of genera from Chirothrips. However, the new species, together with tuttlei and colei, is distinguished from species placed in Arorathrips by the presence of more than 6 stout conical setae on the median area of the mesonotum, and the anterior abdominal tergites with D1 and D2 setae spine-like (conical and stout).