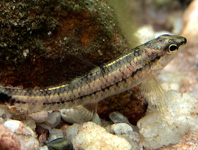 The Indian genus Ajothrips (Thysanoptera: Thripidae) newly recorded from China, with description of the male

The genus Ajothrips was erected for two new species from India (Bhatti 1967), although subsequently a third Indian species was added (Bhatti 1997). All three species have remained known only from females, although Mound (2009) recorded the presence of sternal pore plates in unspecified males of this genus. The purpose of this note is to record the type species, A. karma, from China, and to describe the unknown male. The systematic position of the genus has a confusing history. Considered by Bhatti (1967) as related to Scirtothrips, it was subsequently excluded from the Scirtothrips genus-group (Masumoto & Okajima 2007). However, more recent studies (Ng & Mound 2015; Lima & Mound 2016) have retained the systematic relationship proposed by Bhatti.