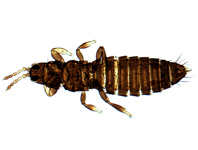 The European genus Kakothrips Williams includes seven species (ThripsWiki 2015) that are known to be flower-living mainly on Fabaceae plants. The genus is recorded across Europe from Morocco to England, and eastwards to Syria and Iran (zur Strassen 2003). Only K. pisivorus (Westwood) is known from northern Europe, and this is the senior synonym of the type species K. robustus (Uzel) (Collins 2010). Closely related to Frankliniella, the species share with the members of that genus the character states of ctenidia present on tergite VIII anterolateral to the spiracles, and a complete row of setae on both longitudinal veins of the fore wing. Also, the pronotal anteromarginal and anteroangular setae are half as long as the posteroangular setae. The character states of the genus Kakothrips include: ocellar setae pair III arising between posterior ocelli; fore tarsus with an apical tooth, laterally; pronotal posterior margin without a pair of small setae between the major posteromarginal setae. In some of the species the males bear a pair of stout tubercles laterally on tergite VIII, and sternites III–VI or III–VII of males have a transverse pore plate. All the described species are known only from macropterae, and they are similar to each other in structure. A few distinguishing characters include colour of body, fore wings and antennal segments; the shape, length and position of the fore tarsal tooth; size of body, antennal segments, and major setae; and in males, shape of sternal pore plates, and length of setae on tergite IX.